From American Blues Blog: "A Musician's Life On the Road"

“THE DREADED ONE NIGHTERS!" 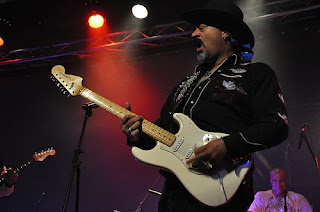 The 2009 Chicago Blues Festival/ Europe Tour:
An Inside Look At A Musician’s Life on the Road
Chapter 3: “The Dreaded One Nighters!”

In early 2009, my good friend and great Bluesman, Zac Harmon invited me to join him and his band as a featured guest on a tour of Europe he’d be headlining later in the year. The soulful Blues songstress Diunna Greenleaf would be the other featured artist. After rehearsing in Dallas, we flew to Paris to begin the six week long Chicago Blues Festival. It’s been an annual European concert event for the last forty years. This is my day to day account of six amazing weeks of making music, traveling, insane humor and making lots of new friends . . .

It’s about to get serious! After two sold out nights at Club Banana Peel in Ruiselede, Belgium, we are about to embark on a string of twenty straight “one nighters” across a huge chunk of Europe. In travelling performer circles, the term “one nighters” can strike a sense of dread into the very core of the most hardened “Road Dog.” One nighters are when you roll into a town, set up, do a show and move onto the next show on the very same night, usually late. Everybody takes a deep breath as we pull out of Ruiselede to make the 9:00AM train from Lille, France to Nimes in the South. Tired as a Mofo! 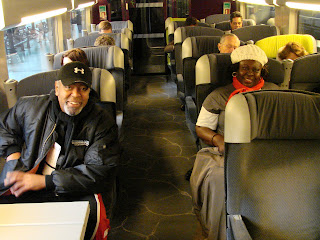 We pull up to the train station in Lille and run like Hell to the terminal. It’s cold and windy as fuck outside!!! Guillaume gives us the tickets as we board the train for the five hour ride to Nimes. Once onboard, we get a chance to laugh, relax and take in the beautiful French countryside.

Southern France is warm and beautiful. Like Southern California but much cleaner. We are dressed for Northern Europe! Didier picks us up and takes us to Novotel. My room there is on the 6th floor and I have a spectacular view! Our show is in the hotel’s auditorium . . . the Hotel Atria Auditorium. We have a great show, which is sold out. 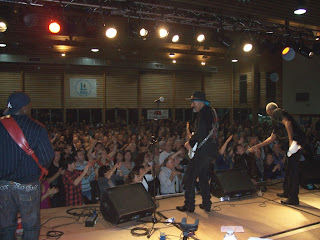 After visiting the Roman Coliseum in Nimes early in the morning, we catch the train to Avoin. From this point, everything becomes a blur. It’s twenty days and nights of fleeting moments, amazing shows, late night “solve all the world’s problems” drunken conversations, loads of hysterical laughter and hotels too numerous to name. I remember when I played guitar for Michael Jackson, how things became blurry after a few months. 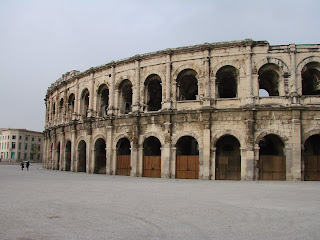 Well, the Chicago Blues Festival Europe is moving twice as fast as Michael’s tour and things are intensely blurry after only a few days!

Tonight we are at Salle Des Fetes Ville Haute, in Torunon Agenais, France. Two things make this date stand out in the 20 day blur . . . Tournon is an unbelievably beautiful medieval hilltop village and our hotel, Chateau De L’ Hoste is a 14th century house in the country. Beautiful as this may be, it doesn’t change the fact that there are almost three weeks of one nighters to do before we get a chance to rest and recharge. 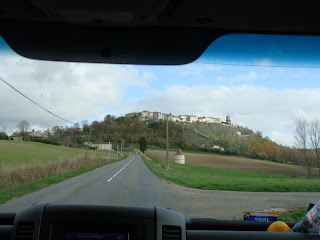 Next: “A Night In Switzerland!”

To learn more about me and my music, visit my website: www.greggwright.com

An exclusive to the American Blues Blog by Gregg Wright.
Keep Reading...