DIPLOMACY THROUGH MUSIC by Gregg Wright

I'm a true believer in music's power to bring people together. During my career, I've seen music overcome national, ethnic, cultural, religious and linguistic barriers in ways politicians can only dream of. For me, music's true purpose is bringing people together!

Music, art and culture are important elements in the human experience. They are the means by which societies identify, express and ultimately heal themselves. In today's world, this is increasingly cross cultural.  Musicians (real ones, not "Rock Stars!") are a little like Shamans . . . part Preacher, part faith healer. We use our gift to lift the mind, body and spirits of humanity. Musicians touch lives in many profound ways. Sir Bob Geldof's Live Aid, which raised millions of dollars to fight famine in Africa, comes to mind. Same with Michael Jackson and a host of other great music artists, with "We Are The World."

Music is so much more powerful than we here in America are taught to think. For a lot of us, it's merely entertainment, which is fine I guess. In the music industry, too often it's just a commodity. A way of making some executive rich. But when people come up and say your music got them through tough times, or you totally connect with an audience that speaks a completely different language, you know there's a lot more to it than meets the eye.

When I tour former Soviet Bloc countries, I can see we've gotten a lot further along in a much shorter time, with music and communication than we did with 50 years of hostility, nuclear arsenals and mutually assured destruction. The Cold War was what happens when the world is run by profiteers and paranoid, crazy people! I guess that's why despots tend to jail musicians and artists first. Can't have people feeling good, getting along and having a good time if you're planning on world domination! Governments should consider making musicians official ambassadors of international diplomacy. We can bring a lot of people together in a short ninety minute set!  Diplomacy through music . . . a cost effective, educational and fun way to keep the peace, wouldn't you agree? 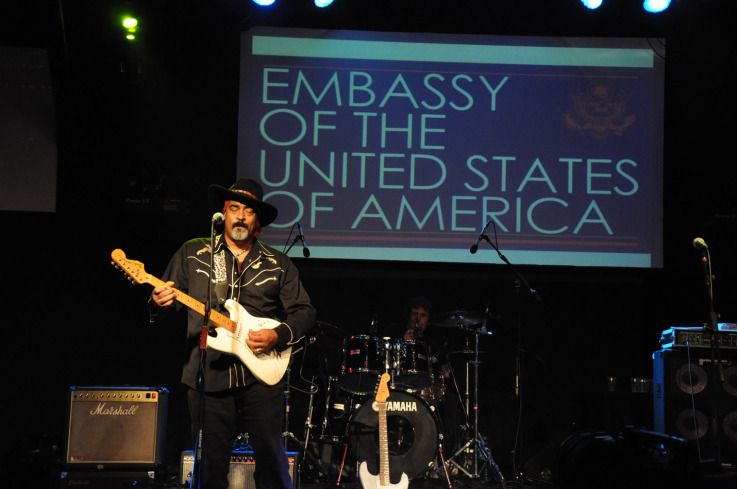 Gregg Wright's concert at the Blues & Soul Festival in Skopje, Macedonia was co-sponsored by the U.S. Embassy.